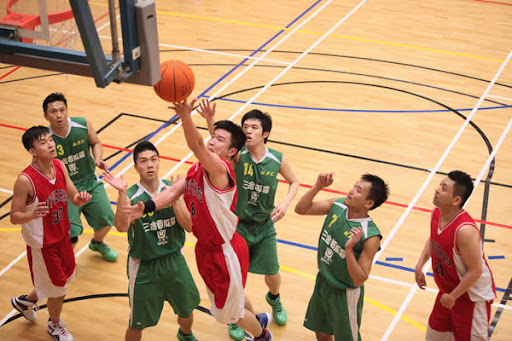 Wyverns outlasted H.F.C. after heated arguments between players and won its 3rd game to advance as the 4th ranked team from FORCE Division into play-offs.

Tabo Chak (HFC #82) scored his 500th points in the game but the milestone was not companied by a victory of his team.

H.F.C. had comfortable leads at times and led most of the game, Wyverns come back more often, however. The game was not decided until after two technical fouls were called on players from each team.

Late in 4th period, H.F.C. was still up 45-43, falling to the ground after an defensive play, Tabo had his legs tangled with Martin Yip (WYV #1) after the Wyverns’ possession ended and word exchange begins. Like in many other similar situations, it is never the first involved players who are having trouble.

Seeing his team-mate confronted by opponent, Nikko Kwok (HFC #83) went into them and pushed Martin. Martin looked to fell to the ground hard and John Chow (WYV #2) immediately left the team’s bench and almost all players and referees got together into a crowd, either they were separating others or being separated.

The situation was cooled down before a real fight might have began. Nikko was called for an Unsportsmanlike foul and John was disqualified for leaving the bench.

Both teams missed all the ensuing technical free throws and Wyverns had the ball to resume game.

With the already intensive defence level raised up even higher after the arguments, neither team could score from the field in the next possessions.

Kenny Wan (WYV #8) went to the line after Patrick Ip (HFC #33) was fouled out and made one free throw, Martin went to the line another time and hit a game-tying basket from the free-throw line for a 45-all score.

Tabo lost the ball in the next possesion and Colin Wong (HFC #7) was called for his 5th foul while trying to defend a fast-break basket and Martin split another pair of free throw for a lead, the first time for Wyverns since the middle of the first period.

Down by one and less than 20 seconds to play, with H.F.C. having the possession and the chance to win the game still, Tabo drove to the basket in the lane but mis-communication between him and Andy Ching (HFC #25) resulted a bad pass straight to the base line as the ball went out-of-bound.

Steven Chan (WYV #82) hit the go-ahead free throw for a two-point lead with only two seconds left in the game.

After the final time-out, as Tabo’s final, desperate long jumper failed to hit even the rim, Wyverns took a third win to enter play-offs.

It was only the second time for H.F.C. to lose back-to-back games in each of the six seasons (45 games). The last time was a loss in 2009 in Semi-Final against M.I.B. followed by another in the 3rd-place game against Trojans.

With a loss by Trojans later in the evening, Wyverns would rank 4th with a better goal average among the the 3-3 teams in a three-way tie.