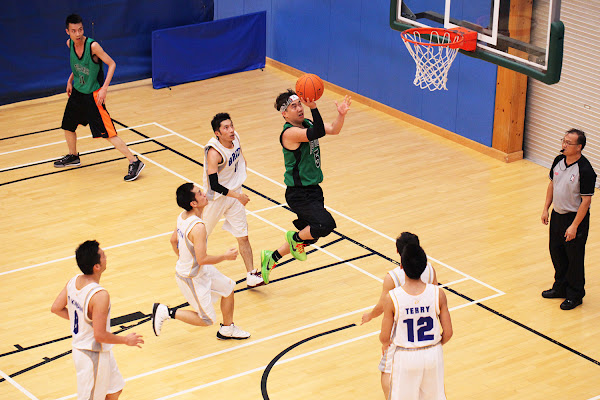 Michael Lau (TRO #11) scored a double-double and a game-high 17 points and Jerry Lee (TRO #5) added 14 for Trojans, who rout GRIZZ 59-32 in Semi-Final on Sunday and the defending champion is returning to the Final for a 2010 re-match.

Ho Yin Chan (GRI #0) was a perfect 3-for-3 in the first period for six points, but those are all the points GRIZZ could scored until Trojans already had 23 in the second period. The rest of GRIZZ combined to miss 12 attempts from the field and had six turnovers already in just that span, while Trojans were everywhere making half of their shots.

After his first six attempts, all from beyond the arc, were missed, Leo Chow (GRI #7) finally made his first field goal, but GRIZZ was still behind 11-25 and Trojans brought a comfortable 13-point advantage into the half. While GRIZZ had altogether 14 points by then, Michael and Jerry combined for 19 points already.

Back-to-back three-point baskets by Leo brought his team back to single digit deficit at 22-29, and split a pair of free throw later when his team was still down by 10. His next basket cut it to 25-33 but Mike Yau (TRO #8) made a dagger from deep to re-gain a double-digit lead that the defending champion never surrender again.

With the game out-of-reach for most of the game, Trojans never needed to foul much and as GRIZZ rely mainly on out-side jumpers, they got only two shooting fouls while  Trojans was 8-on-13 at the charity strip.

Ryan Murphy (GRI #50) is the tallest player in the League but he has only four rebounds for GRIZZ, who were out-rebounded by Trojans 20-to-38 and allowed 14 offensive boards.

Mike Yau had eight assists. He did it earlier this season against G.T. Explorers and is still one of the only three players with that many assists in a single game.