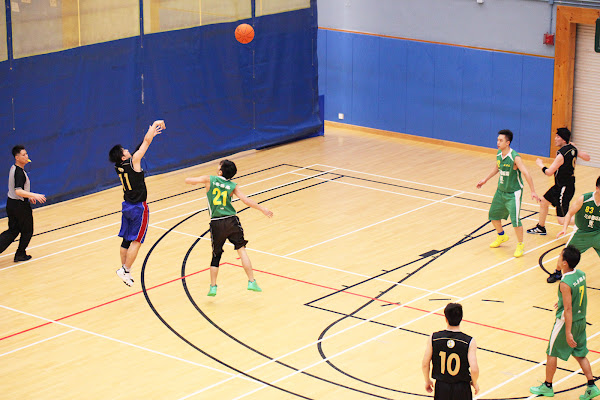 Chung Ming Mok (MAY #11) poured 18 points with four three-pointers and helped MA YING to beat H.F.C. in Semi-Final at Smithfield Sports Centre and will try to be champion again against the same team last year.

A Slow start by H.F.C gave up a six-to-nothing run, but Ben Yu (HFC #3) came off the bench for a much-needed three which helped his team for to cut it at 7-8 at the end of the first period, before Nikko Kwok (HFC #83) scored for a 9-8 lead to start the second period.

Colin Wong (HFC #7) hit from beyond the arc and Nikko’s free throw put H.F.C. up for a five-point lead as the former champion re-gain some control of the game while MA YING was losing some intensity in the middle of the second period.

The three former T-REX just step up and help MA YING to recover. Vincent Siu (MAY #0) hit a long jumper, MAY leading scorer Mok (#11) made his own long range and a two-point basket from Jonathan Poon (#44) helped to cut it at 16-17.

While H.F.C. still struggle to score and get second chance points without any offensive rebounds, Mok’s lay up under the basket finished the T-REX spurt but Danny Ho (MAY #9) and Otto Chan (#2) extended it to a four-point lead.

Nikko scored the final two points of the half for H.F.C. when they were down 19-21, but Mok hit his second trey and brought his team a five-point cushion at the break.

Mok’s hot shooting continued after the intermission, after he hit his third long range bomb for six-point lead, he made another to put MA YING up 30-23 before Nikko attempt also from beyond the arc, only it became an air-ball that went out-of-bound.

Failing to defend another easy basket under the rim from Danny Ho (MAY #9) that put the team in black uniform for 40-26 distance, H.F.C. looked to re-gain some life after two three-points from Ben and Tabo Chak (#92) that cut turn the deficit to single digit again in the middle of the final period.

Under full-court press, MA YING did had a couple of turn-overs just H.F.C. still failed to capitalize. Tony Lau (MAy #10) and Jonathan each scored two more points to re-gain a 13-point lead late the period helped to seal the game.

H.F.C. would scored five more points the rest of the game as the score look respective with a four-point only difference.

Tabo was fouled out with two assists, but the H.F.C. captain committed seven turnovers and scored only five points.

Nikko’s 17 points helped to re-gain the leading position on the scoring category right at 14 points per game while Jerry Lee (13.7) dropped to second with a slight edge. Mok ranked 7th at 11.3 per contest.

MA YING made six three-points in eight games all season entering Semi-Final. Before the game, Chris Shiu (#7) led his team in three-pointers made at three, followed by two from Mok, while Tony was the only other player with a three-point basket and he hit one back to January 9 when MA YING start the season against Trojans.