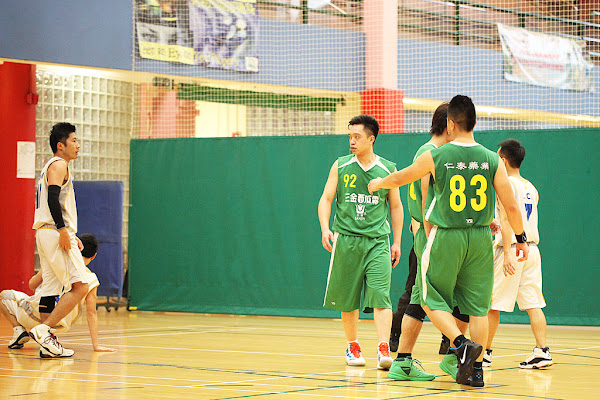 Newlywed Alfred Lin joined the team in a week after his big day for H.F.C., who has only six dressed players for the game that they need to win for a first seed in the division. The centre scored a point only but grabbed six boards.

Despite short-handed, the overall bigger H.F.C. used their size to score inside in the front court but perhaps with concerns of fouls, their size advantage did not capitalize on the other end, allowing 19 offensive rebounds by GRIZZ. Including the many second chances, GRIZZ had 56 field goal attempts, a disparity to only 30 by H.F.C., but only made 12 of them.

Tony Chow (GRI #11) and Terry Suen (GRI #12) each added seven points while Leo Chow (GRI #7) and Chan Ho Yin (GRI #0) each had six, but GRIZZ failed to earn a second victory yet in the year and they will face MA YING in the first round in play-offs on May 6 at Chai Wan Sports Centre.

Tabo has now 633 points behind him and is shooting nearly 80 percent from the free throw line. The eight turnovers tied his season-high. The 38 points by H.F.C. tied their season-low, they were 38-44 in their only loss this season against Dream Team. Tabo also had eight turnovers in that game.

Big man Ryan Murphy (GRI) had a team-high seven rebounds but missed all five attempts from the field and both free throws.

This is only the third game this year GRIZZ had scored more than 30 points and they lost all games when they had 36 points or less than that.

A re-match of this game may happen in the second round if GRIZZ can upset MA YING in the first round and advance.