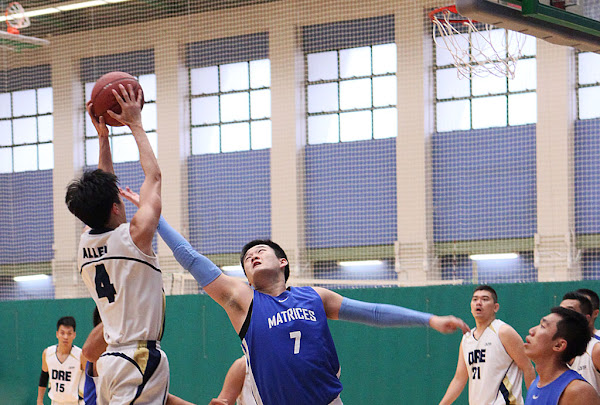 Dream Team cut the deficit to 24-27 mid-way through the third period after Matrices extended the lead to 7-points, the biggest margin of the otherwise close game for three periods, and Matrices put it back to five points at 29-24 before four free throws from Dream Team. After a loose-ball foul on Matrices, Wallance Wong (MAT #40) was called for a technical foul thus Dream Team got four free-throw attempts, which they made them all, and still go the possession, and it was 29-28 entering the final period.

Six lead changes started the final period, and Dream Team failed to score in the ensuing possession after Tsang Chun Keun (MAT #2) put Matrices up 35-34, the Matrix scored another basket which gave his team a 37-34 lead but Chow Man Chun (DRE #5) made a three-pointer that tie the game. Tsang scored the third straight basket of Matrices for a 39-37 lead and kept Dream Team from scoring in the final possessions as Matrices become the first Finalist this year for the Flag series.

From the Loser-Bracket, Photons will face Avengers again in three weeks after beating  SOUTHORN Tigers 40-34 and routing SAMURAI 64-24. Cheuk See Ho (AVN #10) took advantage of the high paced game for 21 rebounds, the second highest mark in HOOPS.HK, along with 15 points. The winner this Sunday will face Dream Team next week to decide who can enter Final from the losing side.