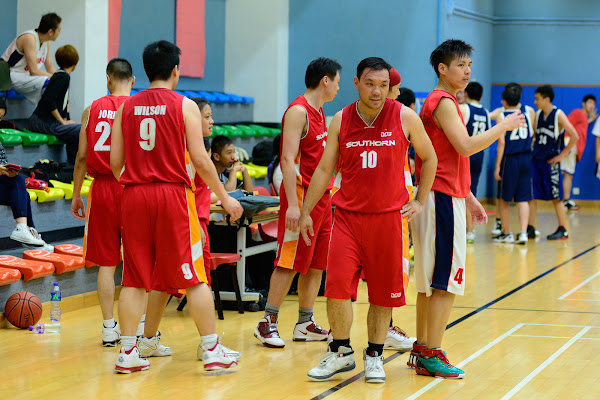 It would be a very unusual circumstances when no other teams have more players than G.T. Explorers in any given night, but they really did on the first day of Original Four this year. SOUTHORN Tigers, however, still started the series by beating G.T. Explorers 49-31.

Already a very happy re-union with the four teams, seeing the return of the Explorers, and with eight players could arguably be a surprise, especially none of the other three teams have more players in this same afternoon.

There were only four Tigers to start the warm-up period and six when the referees call for tip-off. Wilson Chow (SOU #9) only arrived court as the seventh Tigers just before tip-off and came off the bench. By the time, all eight Explorers already had their legs warmed well.

The game was close through-out the first half.

Both teams were slow otherwise in the beginning of the game, and neither could score for a couple of possessions until Stephen Tsang (SOU #23) stole the ball and scored on a fast-break layup which gave Tigers a 3-2 lead.

Thomas Lau (GTE #3) scored on a beautiful spin-move near the basket before Raymond hit another jumper almost the same spot as the game start to tie the game at 8-all.

Dennis and Stephen each made a jumper and Tigers re-gained a 12-10 lead before the end of the first period.

Trailing only by two points after the game was ten minutes old, G.T. Explorers tied the game again at 12-all and took a 16-14 lead after Roy and Barton Lai (GTE #24) each scored on a jumper as Tigers needed a timeout.

Tigers re-grouped and tied the game after the talk, Wilson and Benny Wong (SOU #7) combined for the next seven points, including a spin-move that was not called for travelling, which took the lead back and extended it to 23-16 and eventually to double figures at half time.

“Well rested”,after the half-time break, looked to have an opposite effect to the Explorers, who can only score three points in the third period. While Tigers’ lead went nearer to the twenty-point mark, however, they became loose and a few careless turnovers allowed Explorers to cut the deficit to only eleven in the middle of the final period.

All players in the game scored. Roy led all Explorers by 10 points and five rebounds. Roy was called for an unsportsman-like foul in the first half when he sent Stephen to the ground from behind. Stephen missed both free throws but finished the game with 12 points on 6-for-13 shooting from the field.

Benny become the sixth player, the first in O4, to have at least 14 points and five assists in a single game.

While Au Chi Chiu (SAM #37) showed up in the SAM-MIB game for the first time since more than a years time after he had surgery on left knee (torn ACL), Ken Leung (SOU #14) missed the game for Tigers since he tore the ACL in his right knee in previous game against SAMURAI. Other missing Tigers include Edward Fong (SOU #1), Cindy Lee (SOU #17) and Patrick Tse (SOU #8).