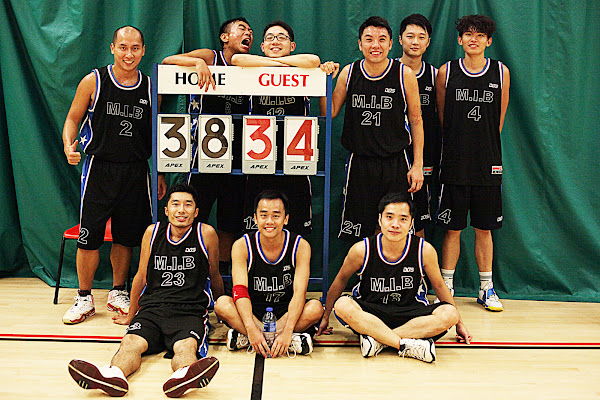 M.I.B. erased a six-point deficit in the final period and handed G.T. Explorers a third loss and the 38-34 victory lift the men in black to the overall second place in Original Four 2012.

Missing all five attempts since the first period, when he made his try of the game, Adrian Chou (MIB #21) lays it in and took back a 30-29 lead for M.I.B. in the final minutes before Roy Kwok (GTE #27) scored his own to re-take a one-point lead for the Explorers. Roy was fouled on the play and he completed the three-point play as GTE led 32-30.

Chan Ho Yin (MIB #13) made two points which tied the game, and after G.T. Explorers failed to score again, he split a pair of free throws as MIB was ahead for good. With the possession and an one-point lead on hand, Adrian asked the teammates to pass more but when the ball gets to his hand while he was open in the lane, he said “Correct!” and he did not pass, but drove to the basket and scored on the basket that stretched the lead to three-point with about a minute to play.

Barton Lai (GTE #24)’s basket cut it to an one-point game agin with seconds less than a minute. Jefferson Tong (MIB #8) missed a free throw but made the second that kept MIB ahead at 36-34. With a potential to tie or even lead again, Explorers could not score and another free throw from Adrian gave these men in black a three-point cushion in the final seconds, when at least they are confident they would not lost in regulation.

Kit Cheng (GTE #86) continued to be the single explosive weapon for the GTEs. The forward scored 18 points in a second straight game, but his three-point shot in the final seconds was off the target. Leo Chow (MIB #17) was fouled after he got the loose ball and his final free throw went into the basket as MIB won a second game this year to rank second overall.

Seven of the eight fouls by the Explorers in the final period were shooting fouls, including an unsportsmanlike foul by Kit.

Simon Chan (MIB #2) scored 11 points, made three treys which helped M.I.B. to stay in the game in second half. Part-time SAMURAI Jefferson and Part-Time Tigers Adrian each added seven points. Gilbert Fu (MIB #12) did not attempt a shot in a second straight game.

M.I.B. averaged a 6.5 head counts in the previous two games, but had nine players in this one.

SAMURAI had only three dressed players in the last minute and the game was forfeited. SOUTHORN Tigers (3-0) automatically become the overall winner with three wins and six points. SAMURAI (1-2) have only three points (zero points for forfeited team) and tied G.T. Explorers (0-3) but still own the tie-breaker in the match-up result.