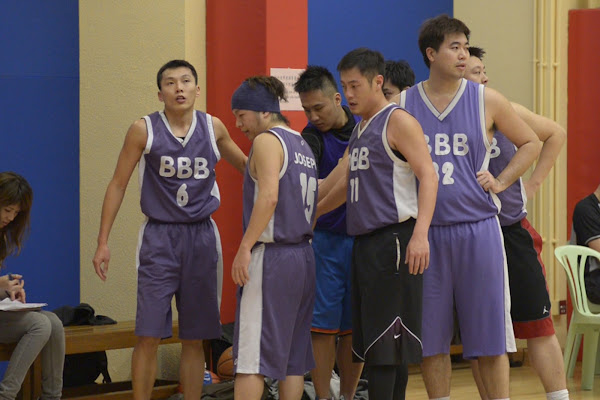 Big man Chan Chi Lung (BBB #32) scored 18 points and 11 rebounds, Tony Cheung (BBB #0) was perfect from the field and at line for 14 points and added ten boards as the two double-doubles lifted new team B.B.B. for a 53-42 victory over Dream Team, the former two-time champion that lost two straight game in 2013.

Chin Seung Lung (Leo, DRE #3) leads all team-mates in scoring for a second straight game by 13 points for Dream Team, who was under-sized against new team B.B.B. and lost 22-35 on the glass.

After Leo’s three-point shot tied the game for a second time in the first period, he scored the period’s last two points as Dream led 10-8 entering the second period. He made two free throws to re-gain a 12-10 lead early in the 2nd period but that was the last lead Dream Team had after Chan Chi Lung started 14-0 run by two free throws which tied the game.

Sean Ko (BBB #6) scored five of his team’s third-best nine points in the 3rd period that helped B.B.B. to maintain double-figures lead until the end of the span.

Chiu Ka Wai’s two free throws and layup cut the deficit to only seven points late in the game and made things looked interesting just there was not enough time for Dream Team to comeback in this game.

It is the first time since 2007 May when there are two double-doubles from two players on the same team in a single game.