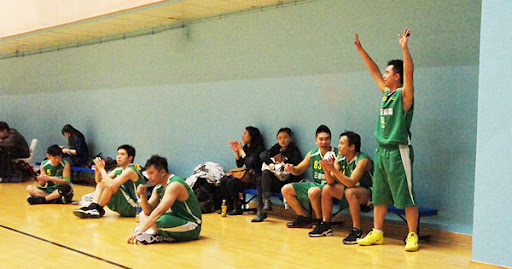 Two weeks into the season, Chung Sing’s brief (and amazing) lead in division with their season-opening victory is done as GRIZZ took a second win to top it after edging La Star. Dream Team also played two games and dropped Chung Sing to third in standings. H.F.C. started 2011 with a 62-30 victory and is division-leading with four other teams having two points.

Either it was Explorers failing to give it a fight or H.F.C. was simply too dominant, the team in green was huge from start to end for a 62-point effort. Nikko Kwok scored 10 of his 19 points in the first period alone by 5-for-6 from the floor. Tabo Chak added 10 points while Ben Yu return from injury and scored 9 points off the bench without missing any of his four attempts. All but two H.F.C. did not score.

Combined for 15 points, Roy Kwok (8) and Kit Cheng (7) did, however, also totaled 15 of the team’s 23 turnovers. Vincent Wong had five points and Taylor Ng failed was in foul trouble with four fouls and failed to score.

Tabo is now 468 points at the top on the all-time S.B.L. scoring list.

The two-time champion bounce from a season first loss to edge D.S.F. for a nine-point victory. It was a slow and ugly game in the middle of the second period, when neither team was able to score a point for a span more than five minutes long. Michael Chan’s basket cut the deficit to only 8-10 but Alex Li left the game with a wrist injury and did not return. Dream Team went on to capitalize the undermanned opponent for a 21-11 half-time lead and went on for the victory.

Dream Team captain Man Chun Chow snapped his streak of 16 games with at least one three-point shot and scored only two points. Tsz Chiu Chim led all teammates with 11 points. Michael scored 16 points and grabbed eight boards for D.S.F., which also got nine points from Alex Yeung and six from Benson Kwong and Paris Chan.

Both new teams were slow to start their first game in the League, with each team out-scored the opponent by a single point in each of the first two periods, as a result of a 12-all tied half-time score. B.O.B. run away in the third period when they score 10 points and allowed only one free throw by Wyverns and maintained the lead the rest of the game. Taichi Chan led all scorers with nine points, Kwan Sheung Lee added seven for B.O.B. and Hoi Lee scored five points and had six boards.

Former Trojans John Chow and teammate Thomas Chow were both fouled out and did not attempt a shot. Danny Yu scored eight points and rebounds apiece and Gary Lo added 10 rebounds.

GRIZZ, the semi-finalist last season, became the first team to win two games in the League, only in the final minute.

GRIZZ started the game with a 6-0 run but allowed a 10 straight game points later when La Star took a 10-6 lead, but the new team couldn’t score again in the period and only tied once in the middle of the third. With a 28-22 lead entering the final period, GRIZZ failed to score while Penny Yau’s basket following Keung Siu’s two free throws cut the deficit to only two points. Andrew An finally scored the lone basket in the period for GRIZZ, only before Penny cut it back to two again. GRIZZ hang on for the final minute with just the two-point cushion and took their second straight win and the top rank in division. Roger Mahmud and Ho Yin Chan each added eight points but Terence Leung was scoreless after a nine-point performance in previous game.

Penny Yau scored a game-high 11 points for La Star, who also had six from Nicky Sin and five from William Hui.

SAMURAI and SOUTHORN Tigers are the only teams not yet played, and will have their debut this Sunday respectively against Chung Sing and D.S.F..