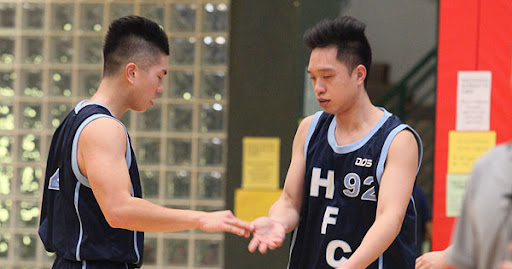 Nikko scored 21 points and 13 boards, followed by three steals and one blocked shot and assist apiece as H.F.C. defeat Trojans 50-39 on Sunday.

H.F.C. scored the game’s first basket, but Jerry had five points which concluded a 8-0 run for a 6-point lead in the first period. Jerry also scored the team’s first seven points in the ensuing period, but Andy Ching and Patrick Ip each added three-pointer to tie the game twice.

Andy So’s basket in the period was followed by another from Nikko, and H.F.C. had a four-point lead, that does not last long as Billy Ip’s three-pointer cut it to one again. Trojans just could not find an answer to Nikko, who added two more points for H.F.C. who brought a 23-20 advantage into the break.

Billy hit another basket from deep when Trojans was still down by 26-29 in the third period and Tabo Chak, the league’s leading scorer who did not score a point in the first half, made two baskets and H.F.C. re-gain a seven-point lead. Those were the last points H.F.C. could score before the end of the period.

Jerry hit his 4th basket from beyond the arc and Mike Yau made two foul shots and the five combined points kept Trojans in the game, facing only a two-point deficit.

However, Trojans had only six players dressed, and that disadvantage begin to show in the final period.

Patrick’s basket  in the middle of the final stanza extended the lead to double figures at 45-34 and Trojans could never get closer than 10 points the rest of the game.

Alan Tam hit a three-pointer that gave H.F.C. another game with 50 or more points, a category that H.F.C. led the league with 11 of these kind of games.

Jerry became the second player to made 5 three-pointers in a single game for multiple times. H.F.C. forward Andy So holds the single-game record with 6. Benny Wong, Ka Wai Fu and Chun Hong Tsoi are the only other players ever made five shots from deep in a game.

The two teams played their fifth meeting and each team won alternate games in the series.

Tabo’s quiet night gave him six points only but he also added five assists, four boards and two steals. He needs 16 points to reach 500 points in the League.

H.F.C. switched from their green uniforms to the old one in blue because Trojans is also in green.