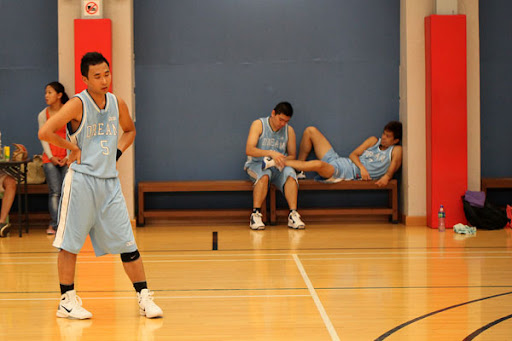 After a quick start in their first play-off game in 2011, the two-time champion Dream Team was flat for the final three periods as their streak of reaching final four snapped at four after a 30-47 blow-out loss to H.F.C., another former champion.

Tsz Chiu Chim (DRE #7) made a fall-away jumper which concluded a 13-4 run and helped to build a nine-point lead in the first period, holding H.F.C. to zero field goals as they scored all their four points at the line.

However, Chiu really did fall away after his jumper, as the cost for this basket included his left ankle and probably this game.

As their starting centre was missing, Dream Team allowed 16-to-2 spurt which gave H.F.C. a five-point advantage into the half, and the men in green did not even need the league’s scoring leader for the run.

Before even a single attempt from the field, Nikko Kwok (HFC #83) was called for an offensive foul late in the first period, and he headed to the bench for rest of the first half with his 3rd foul of the game.

Ben Yu (HFC #3) swished a three-point shot near the end of the first period to cut the deficit to six points, Shawn Man (HFC #5) swished another from the left wing before he drove to the lane and made the jumper that took a 16-15 lead in the middle of the second.

Nikko (HFC #83) returned to the court and scored his first points in the third period, but also had his 4th foul called soon. His absence was hardly a concern for H.F.C., as Patrick Ip (HFC #33) cleaned the glass four times (three at the offensive end) in the period when H.F.C. still had a 11-to-6 advantage on rebounds.

After the lead diminished to only 23-20, Andy So (HFC #14) made his basket and brought a five-point lead into the final stanza.

Seung Lung Chin (Leo, DRE #3) would scored the team’s first field goal in the 4th period, but it only came after a 12-to-null run H.F.C. used to built a 24-point lead in the middle of the final period.

A three-point play by Ka Shing Lam (DRE #23) was the only tiny bright spot for Dream Team in the rest of the game as H.F.C. emptied their bench for the garbage time.

Tabo Chak (HFC #92) had nine points, eight rebounds and five dimes and was perfect at line, making all four foul shots. Nikko had eight and eleven before getting his 5th foul. Patrick grabbed a game-high 14 rebounds, which is also a personal best.

Leo was the only scorer in double-figures for Dream Team. The speedy tiny guard was 5-for-11 from the floor for eleven points, followed by six points from Man Chun Chow, who missed ten of his 13 attempts from the field and both at the line.

Dream Team lost both games when they scored exactly 30 this season. In four years in this league, Dream Team won four times when they failed to reach the 40-point mark.