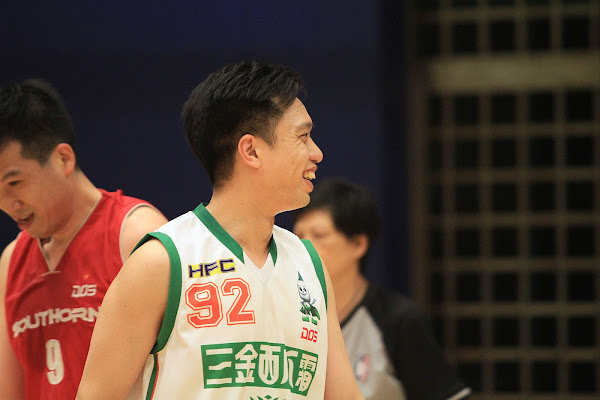 Nikko Kwok (HFC #44) scored a game-high 11 points and 10 rebounds and Tabo Chak (HFC #92) added 9 points to go along with six rebounds and assists apiece as H.F.C. win its second straight game by 50-33 and handed a second straight loss to Tigers, who also lost Wilson Chow (#9) for the second half.

Wilson started his game by completing a three-point play which took a lead for the players in red and he made his second attempt from the field also which put Tigers up 7-4 in the middle of the first period.

Tabo scored all his four points in the period at the line and Colin Wong (HFC #7) scored six points in that span when H.F.C. used a 10-2 spurt and re-gain a 14-9 lead entering the second period.

Wilson scored the second period’s first basket which cut the deficit to 11-14, but a three-point basket from Ching Kam Ming (HFC #15) capped a mini 5-0 run for an eight point lead for the team in white.

Adrian Chou (SOU #34), who made only 10-28 free throws in 2012, made both his first attempts at the line after Terence Chan (SOU #10) scored two points for the Tigers in the second period.

After Nikko scored in the crowd for a 21-15 lead late in the first half, Wilson swished a jumper from the right baseline and cut the deficit to four points only before he left the game for good with the ankle injury.

Already short-handed with only seven male players dressed, without their biggest player in the game is not helping as the Tigers had no answer to Nikko, who scored seven points and six rebounds in the second half.

Former Chung Sung swingman Sin Lok Ming (SOU #3) dribbled from baseline and scored his first points for Tigers this year and added a three-point shot. Terence added three more points to keep Tigers in the game at 27-34 with minutes left in the 3rd. Tigers had no stops for their opponent however, and would then allowed a 9-0 run into the 4th for a 27-45 hole the short-handed team would never overcome.

While Benny Wong (SOU #7) was waiting for substitution to gain Wilson extra rest right before half time, nobody might foresee the upcoming substitution is a necessary one that will send the hot-hand Wilson to court side for the rest of the game. While Wilson was chasing the HFC’s full court pass on a fast-break play, Patrick Tse (SOU #8) was also diving for the the ball and the two players crashed. Wilson rolled his ankle and was held off court and finished the game with a team-high 9 points.

Wilson was third in number of games played (51) for Tigers in the Southorn Basketball League, only topped by Benny (59) and Ken Leung (56) who is also going to miss the whole season. Terence bounced back from his previous all-miss game with seven points and rebounds apiece.

Nikko leads the League in double-doubles, having accumulated eight times since 2006, and just accumulated 303 rebounds after Sunday. Adrian was the only other 300+ rebound player.

Colin handed out two air-balls when he got two free throw attempts in the second half.