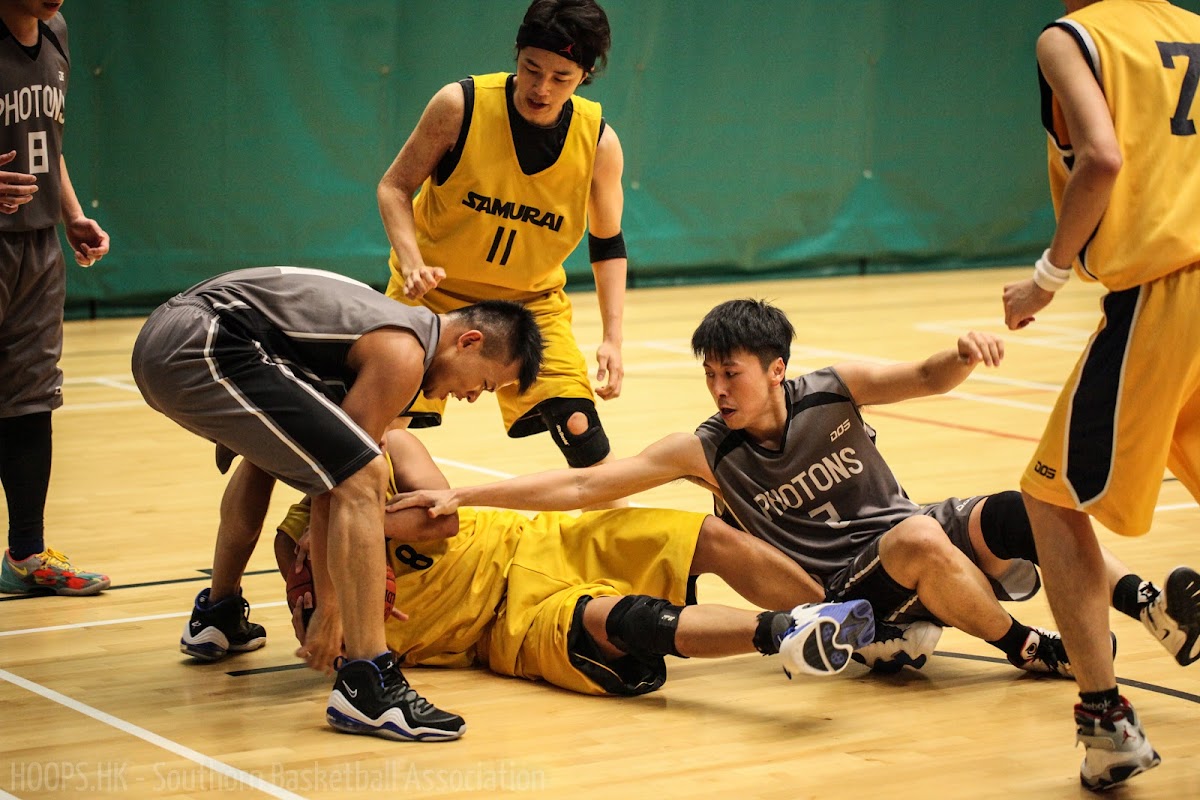 Photons beat SAMURAI a second time in one week and become the winner of Southorn Basketball Flag 2013.

Photons come back from the loser bracket after a one-point loss to SAMURAI in the second round, but they beat SAMURAI on September 1 which force a second game for this year’s Flag winner to be determined.

The team in gray started strong, Max Tang (PHO #9) scored 5 points in a 9-2 run in the first period before Henry Hon (PHO #2) extended it to 11-3, the biggest margin in the first three periods.

Both teams slowed down in the ensuing period. Albert Li (PHO #25) scored his first two filed goals off the bench in the second period for five points, but missed all his next six attempts. He was the only Photons player with field goals in the period.

In the meantime, SAMURAI got three points from Dickson Chau (SAM #1) and Jefferson Tong (SAM #8) added two, but Kelvin Ng (SAM #10) was the only other player attempted a shot, when they combined for only 2-for-8 from the field.

Brought a seven-point cushion at half-time, Photons was even cooler in the third. Alex Li (Pho #7) score the only basket for his team when Photons still led 19-13, but Jefferson scored the game’s next three baskets which tied the game before the end of the 3rd.

After Tsui Ming Yan (PHO #10) hit a free throw to take back the lead, Jordan Chan (SAM #6), Harris Wong (PHO #8), Jackie Lai (SAM #11) exchanged baskets and the lead, turned the once-become-boring game to a nail biter. But after Photons re-take a 24-23 lead, SAMURAI has no answer until Patrick Lai (SAM #2) made a running jumper near the right baseline, which pulled within 25-29 for SAMURAI with about two minutes left to play.

SAMURAI cannot score again while Photons extended the lead and go away with the new Flag.

This is the 79th game played by Photons. They played in two final match-ups in Southorn basketball League (2008 vs DRE, 2012 vs MAY) and this is the second time they played in a determination match-up in Flag after they lost to Wild Six in Flag 2010. Wild Six, later called Matrices, is the only team the win in the previous three years of Southorn Basketball Flag.

Jefferson was the only scorer in double figures in this game. The SAMURAI forward had a double-double with 11 points and ten rebounds. Dickson added six points and rebounds apiece.

Entering this game with 80% free throw in the past two outings, Tsui Ming Yan missed six of his 10 attempts from the line without a field goal. He led all players in the game, however, with 12 rebounds, nine of them from the offensive end.