CHU breaks down in 4th, lost to DRE in OT 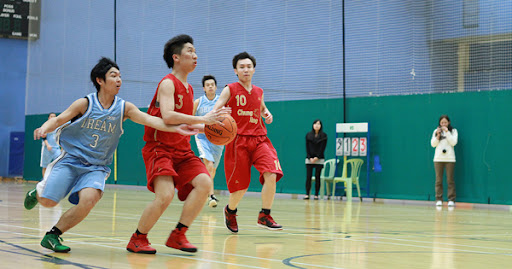 Chung Sing’s number three may be the better player of the night, the team in light blue was the better team. A seven-point difference is either a lead too difficult for Chung Sing to keep, or a deficit not hard enough for Dream Team to take care of.

Five lead changes were mixed with five ties in just the 3rd period alone, neither Dream Team nor Chung Sing could get away with more than two points in the final minutes of that span and the two teams could only get it even again entering the 4th.

Chun Hong Tsoi (#11, Kevin) scored the first two points in the 4th period, but the little one-point lead was as brief as all other leads they had. Following two foul baskets from Dennis Chang (#4) for Chung Sing, Lok Ming Sin (#3) swished a three-point shot and handed Dream Team a 30-37 hole to look at. But this biggest difference down the stretch is not enough for Chung Sing to win their 4th game of the season yet.

Up by 37-32 and with a chance to extend the lead, both free throws from Dennis Chang did not fall.

Centre Sui Yin Chan (#6) hit a basket from beyond the arc which cut the lead to only two. Already in a tense mode for both teams, Kevin got fouled and he hit two free throws that finally ties the game again with about two minutes to play.

Less than a minute for a long whistle, Man Chun Chow (#5) split a pair of free throws which was still good enough for a one-point lead. But Wing Yin Luk (#0 in this game) was fouled by Kevin right after he got the ensuing in-bound pass and was sent to the foul line, with the chance to take the lead back to Chung Sing. However, he missed the first but made the game-tying second.

With 30 seconds on the clock and the game was tied, it was uneasy to tell if Chung Sing’s defence was good enough or Dream Team was simply trying to run the clock out. The result was, no matter how, Dream Team failed to hit the rim in 24 seconds and lost the possession with five seconds left.

After a final time-out, SLM grabbed the in-bound pass but stepped out-of-bound. Seung Lung Chin (#3, Leo) throws the ball from mid-court and hit the back board only as the game needed five more minutes to find a winner.

Following a put-back basket for a 41-40 lead by Kwan Ho Yu (#15 in this game), the Chung Sing guard was called for an unsportsmanlike foul, and his fifth, as he put Leo to the ground. Leo failed to make either of the foul shots but Dream Team still have the ball, and it was then in Tsz Chiu Chim’s hands for twice, left and right for each of the time.

Tsz Chiu Chim (#7) scored only one point in the first 4 periods, and missed both free throws he had earlier in over-time, but his two lay-ups capped a personal 6-2 run that put Dream Team up by three.

SLM led Chung Sing by 12 points, team-mate Wai Yip Mok (#10) added 11 and seven rebounds. Ka Hang Yip (#11) flirted with a double-double with eight rebounds and seven points. Ming Yan Chow (#27) did not start because he was late to the game.

Sui Yin Chan was one rebound shy of double-double with a game-high 15 points and nine rebounds. Kevin followed by hitting all his eight free throws for 13 points. Dream Team number seven Chim had seven points and rebounds a piece.