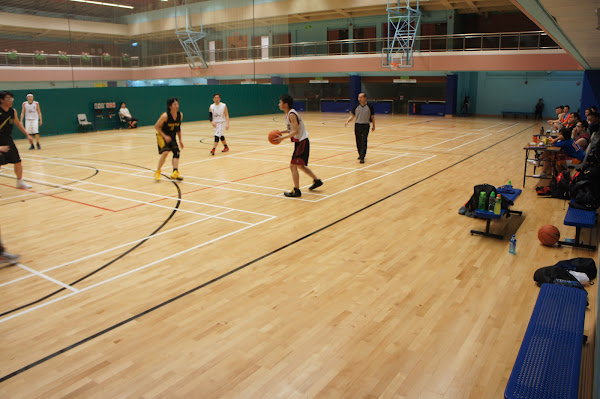 With an empty bench through 40 minutes, MA YING (2-3) could never came close for a third victory yet as SAMURAI (3-3) snapped a three-game losing streak and will be ranked 3rd in the division. MA YING had only four field goals and the 17 points tied the fifth lowest by any team in the League in any year.

Dickson Chau bounced back from a 3-10 free throw performance for a game-high 11 points with 5-6 from the floor, Michael Chan added 10 and the Lai’s brothers combined for 14. Danny Ho scorced a team-high six points, all from free throw, for MA YING, who is without the team’s leading scorer Mok Chung Ming who played at the same time for another game.

With little defense from both teams plus the youth and athleticism, two-time champion Dream Team (4-2) not only confirmed a second place with a victory against Spartans (3-3) on Sunday at Sheung Wan Sports Centre, but also set a new record for the most points scored by a team in a single game after the 87-30 victory.

With almost no zone-plays in the whole second half, Chiu Ka Wai (DRE #4) scored a game-high 24 points, Chin Sheung Lung added 23 and Chim Tsz Chiu (DRE #7) had ten points and broke the league record with 22 rebounds in a single game. Dream Team had 19 assists in the game.

Wan Kong and Lai Ngai Fai each shot 4-for-15 from the field and added 11 and 8 points respectively. Wong Chau Keung added seven points but committed nine turnovers. Spartans turned the ball over 24 times.

(More from the notes below)

While both teams were sluggish in the beginning, Photons (5-0) re-grouped quicker and edged GRIZZ (1-4) for its fifth straight game and will enter play-offs as a first seed from FORCE Division.

While Photons made eight of ten free throws in this game, GRIZZ had 20 attempts but missed 13 of them. A dsimal 7-on-36 shooting was not helping either and only one assist was recorded for the GRIZZ.

Yuen Chun Yin had a team-high six points but no other GRIZZ with more than three. Albert Li scored a game-high 12 points which helped the scorer to remain second in the scorer ranking with 13.4 points per game, only behind Tabo Chak’s 14.6.

A three-point basket came at the buzzer only put it a one-point game as time expire as Ryders failed to have enough time to comeback and taste a first victory.

After starting the season with a four-game losing streak, SOUTHORN Tigers (2-4) won only just a second time this year on Sunday in the 40-39 match-up against Ryders (0-6), who had Sin Ka Kei scored a double-double with 13 points and ten rebounds. Ryders are only within one single point away from their first victory as one of the two new teams in the League this year. A possible re-match will be held as the two team’s first play-off game if GRIZZ cannot beat Tigers for the standings.

Notes on the 87-point game: