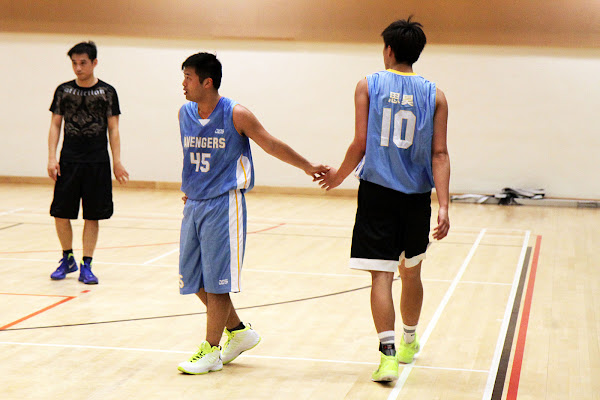 Avengers shook off from the loss on Day 1 and handled the again short-handed Ryders with a 58-29 victory at Harbour Road Sports Centre.

Leung Sai Man (AVN #7)  filled the box score by seven points and assists apiece, four rebounds and five steals to help Avengers, who got 16 and 14 points from Cheuk See Ho (AVN #10) and Cheung Chi Wang (AVN #6). Bernard Sin (RYD #4) again is the lone bright spot for Ryders with 13 points and six boards. The 58 points by Avengers is only two points shy for matching the series high this year, which is 60 points by Matrices.

Matrices rout SAMURAI 43-28 in a game where no players score more than six points except Tsang Chun Kuen (MAT #2) with eight points. But eleven players scored for the team and seven of them scored at least four points, helping them to top the 40-point mark and beat SAMURAI, who got 10 points from Dickson Chau (SAM #7) and nine points from Patrick Lai (SAM #15). Kelvin Ng (SAM #10) and Jackie Lai (SAM #11) are the only other scores for SAMURAI, with 4 and five points respectively. Au Chi Chiu, who played for Matrices last year, is still having his rehab going fine but only could show up at courtside for SAMURAI as coach. Former MIB Corn Hui (MAT #8) returned to HOOPS.HK after missing action with injuries and other reasons.

Dream Team turned a close-fight first period to a lopsided half-time with a lead at 33-20. They kept Photons at bay still after three periods with a 16-point advantage entering the 4th period. But they almost let this game slip away as Photons rally in the final stanza and outscored the Dream Team by 17-4 and just short to finish a comeback. Li Man Pan (PHO #25) had 18 points, Harris Wong (PHO #8) had ten and seven boards, Max Tang (PHO #9) added nine points, six rebounds and five assists. Chiu Ka Wai (DRE #4) scored a team-high 15 points, Cheung Wai Chi (DRE #9) added 14 and Chow Man Chun (DRE #5) added 10 for Dream Team, who got only six players dressed in the game.

MA YING lost by forfeit after failing to show up for the game against SOUTHORN Tigers. MA YING and Ryders will enter the consolation stage where their opponents to be known after the next round finishes.

The series will resume after the Sport for All Day and three games will be held on August 12 at Shek Tong Tsui Sports Centre. Dream Team and Matrices will fight for the first ticket to the Final of Flag this year.