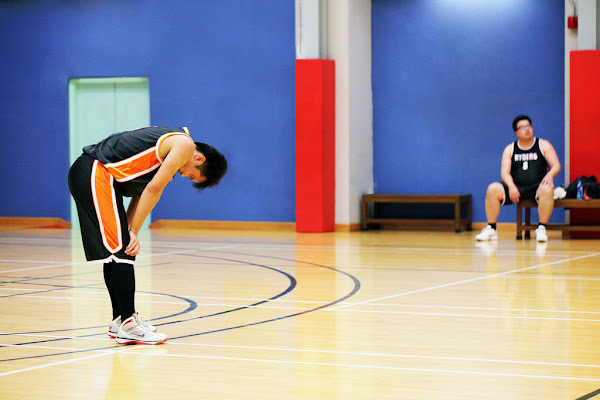 H.F.C. Edged SAMURAI in overtime while Dream Team topped the division by its second win in a row after beating another 6-player MA YING. Ryders and SOUTHORN Tigers, in the mean time, are yet to find a first victory on Sunday.

Chin Seung Lung (Leo, DRE #3) tied his personal best with 22 points and lift Dream Team past MA YING, which had Mok Chung Ming (MAY #11) returned from an one-game absence. Mok scored a team-high 11 points but need 19 attempts (made four) and committed eight turnovers. Otto Chan also added eleven points but MA YING had only six players dressed and was outlasted by the younger and deeper Dream Team on Sunday. No bench points were found from Dream Team as most damage came from Leo.

The Tigers scored over 30 points finally, but allowed over fifty at the same time. Ben Cheng (SOU #34) scored a team-high 14 points on 7-for-10 from the field and added seven boards but was not enough to overcome 22 points by Wan Kong (SPN #5) and lost its 4th straight games of the season against Spartans.

Both teams shot similar from the field but Spartans made 21 of the 24 free throw attempts while the Tigers went to the line only five times and only got two points at the line both from Stephen Tsang (SOU #23).

Eric Leung (SAM #20) hit a three pointer with three seconds left in overtime that cut the deficit to only one point but SAMURAI could not attempt a final basket as Michael Chan lost the ball as time expired. Dickson Chau (SAM #7) scored a game-high 14 points and Michael added 13 but SAMURAI was short on a comeback and dropped a second straight game after winning the first two.

Nikko Kwok (HFC #44) scored 13 points and six boards while Tabo Chak fill the stat-line with 12 points on 5-12 shooting, nine boards, four assists and two steals. The only down side is his game-high six turnovers. (An alternate milestone here: Tabo is now three turnovers shy of becoming the first player to accumulate 200 turnovers.)

Chung Sing (5-0) is red-hot right now with a 5th straight win and unless they lose to H.F.C. in their final division game or should H.F.C. lose one more game, Chung Sing will clinch the top seed in FLIGHT Division. Ryders did led for couple of times and the game was close throughout but the younger and deeper Chung Sing just came out with a better result.

Sin Lok Ming was called for an unsportsmanlike foul when he threw his elbow after he was fouled by the opponent on a fast-break layup. He scored a team-high 12 points and eight rebounds. Another Sin (Ka Kei, Bernard)  scored a game-high 15 points for Ryders, which only got six players for the contest.