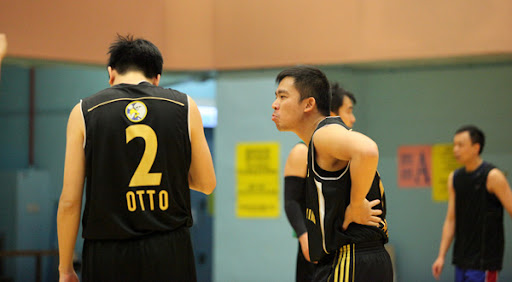 After Sunday, G.T. Explorers (0-3) and SAMURAI (0-3) are the only two teams without a single victory yet this year.

After two 5-man game, D.S.F. had nine players showed up this season and they stunned GRIZZ in a 37-31 victory. The very-much-needed victory avoided a 0-4 hole for D.S.F. but they still have to face SAMURAI and LA Star,  two other teams with also three losses already.

Each team got their own 9-to-nothing run in the first period and the game was close through-out until the final minutes. Three-pointer from GRIZZ cut the deficit to only four points with minutes to play, but a 5-0 run down the stretch put D.S.F. up at 37-28 to seal the game.

Andrew An got a hit on his left eye during the game but was the only GRIZZ with double digit scoring. Ryan Murphy, the tallest player in the league, was scoreless with one attempt from the field but grabbed five rebounds.

Michael Chan was uncharacteristic with 3-on-7 at the line but continue to lead D.S.F. in scoring by 15 points.

Nikko Kwok’s three-point play highlighted a third-period run which turned a close game of two tough teams to a bit of a blow-out. H.F.C. brought a 17-point cushion entering the final period and MA YING, the first runner-up last season, failed to get closer than eleven points the rest of the way.

Otto Chan was fouled out with a team-high eight points. Chung Ming Mok and Tony Lau each added seven points but shot a combined 6-on-21 only and committed eight of the team’s 13 turn-overs. Ivan Shiu scored eight rebounds and five boards and the MA YING captain complained to referee during the game in second half for teammates being fouled but was not called.

Nikko continue to lead the league in scoring and his 16 points on Sunday gave him an average of 15.5 in four games. Colin Wong and Andy So each had nine points and Tabo Chak added seven, leaving him 9 points from reaching 500 points.

With seven males plus two little women, SOUTHORN Tigers hang on for a close fight against new team LA Star, who dropped to 1-3. Benny Wong scored a game-high 12 points and Adrian Chou was one rebound shy of his 4th double-double with 11 points and nine boards.

LA Star turned an eight-point deficit in the first period to a 26-22 lead in the 4th, but Benny’s three-pointer capped a 7-2 run which re-gained a one-point lead at 29-28. LA Star tied the game twice again but free throws from Adrian and Ching Yi Mak kept them from taking a lead and time is just short as Tigers took the win.

Huey Lin had a team-high 10 points for LA Star and William Hui made all eight free throws for eight points.

After two straight loss in the competitive FORCE division, Wyverns, who got 20 points and eight boards from Steven Chan, finally showed life in a 45-39 triumph against Photons, who split its four games this season with a tie to H.F.C. in the middle of the standings. Kennth Ng had an efficient 8 points and seven points which were followed by two blocks and steals apiece and one steal.

Photons had only six players for the game and with two of them fouled out down the stretch, they were not able to overcome an 8-point deficit for the final period. Max Tang scored a team-high 14 points but his team lost two straight after winning the season’s first two games.

Ming Yan Tsui grabbed 11 rebounds and Harris Wong had nine boards but they combined to shoot 5-on-23 and Albert Li scored eight points with 4-12 shooting.

The next game day is on March 27, also at Shek Tong Tsui Sports Centre.

Thank you for reading.